I love when students ask to interview me about my writing process. Enjoy Kayla’s profile of my writing life…

Colleen uses words or phrases about consistency frequently when talking about her writing and academic process. She also repeats words and phrases for effect, such as when I asked her about what she wished everyone know about writing. “It’s cumulative, it’s cumulative, it’s cumulative,” she says continuing, “it’s like doing a push up or throwing a ball. It’s the same thing.” The theme of writing building on itself is something that Tulley’s interviewers touch on, but none of the interviewers we read in How Writing Faculty Write compare the writing process to a muscle that can be worked, like Colleen does. Her idea “writing as an exercise” concept shows up earlier in the interview, when she responds to the question I ask about what she’s currently writing with “this is a long way of saying ‘I’m not fucking writing anything for a while.’ She understands what it means to overwork, and that doing something intensely for a long time will cause burnout/muscular issues. This is really different than the way writing is represented in Tully’s book, because all of the writers say they are constantly writing. While that may be true or an exaggeration, Colleen’s caution of over-working her writing and giving herself well needed breaks so she can focus on other things, like teaching is important.

It was in Colleen’s distaste for academic writing where I found validation. She dislikes academic writing, and confidently says so. Her sabbatical was last semester, so she wrote a lot of academic pieces so she could keep her approachable online platforms meaningful and respected. This is the first time I’ve heard an academic writer say that they dislike writing for an academically minded audience, and I felt a lot of relief as an aspiring academic who doesn’t really want to write for an academic-only audience. Instead, she wants “to write publically, for a bigger audience…I give talks and I’m much more interested in moving the public, even if it’s in a small way.” She also talks about how she has to write her promotional letter this semester, which is roughly 14 single spaced pages; and this is the first time I’ve heard a professor talk about their academic writing as also their administrative writing. Colleen puts thought and effort into what she writes, and also knows that she’s “a very slow, steady marathon writer.” She blocks out time in advance so she can work on things and create the best possible piece of writing, and she works hard to keep a steady, consistent pace, rather than working on things in the last minute fervorously.

The most interesting source of writing process information though was when I asked her about the worst thing she’s written. Her demeanor shifted and she didn’t seem as confident, and she was the most expressive during this answer, touching her face and shifting her body language. She states how bad the paper was, but her focus was really on why it was so bad: and it was because the idea “was from the prof and the idea wasn’t really mine and it never clicked.” She then moves on, highlighting the writing process, or lack thereof, by noting that “I asked for an extension, I never do that. I remember sitting in the office, it was a different one, but I sat in this green chair and I looked at this book and I just felt lost.” Colleen notes before this in the interview that she hates the feeling of “not knowing where it [her writing] will go. Some people like that feeling, but I hate it.” This is one of the few times she refers to items around when she’s writing. It’s interesting how she made a connection to this chair/book through the memory, and I wonder if she would associate that chair in a writing memory if it wasn’t so negative and distinct.

Colleen notes several times in the interview things she likes to have when writing, which is her dogs and coffee, which is also seen in the photos of her office. Her dog’s bed is at the side of her desk, and there are empty coffee mugs cluttering her desk.  These are the same that Rule notes in Writing Rooms, and also something that I noted in my own writing sphere. She mentions that now she is a home writer, because she can be herself and also focus, again supporting the idea that good writing comes from constantly working at it and comfort.

“The writing process is messy,” Colleen told me as we trudged up her stairway and into her home office. My academic spaces are always cluttered messes, and hers was unapologetically so. You can also see some knick-knacks, photos of women she admires, and her desk looks out beautifully to a window with a great tree against it. Her space is very comfortable and lived in, and you can see from the way things are piled that she spends a lot of time at her desk; books are lying open and there’s random house things piling up next to her academic works. Her personal life is blended with her academic life at her desk; and this is where she feels the most comfortable and can do her best writing.

Colleen’s writing companions have a place in the office, too.

A side view of Colleen’s desk. You can see that the academic mess grows and touches her bookshelves.

The orange circular thing under the papers is a stress ball, not an Orange Gone Rogue, as previously thought by me.

Note the empty coffee mug and open books (and that great tree). Colleen’s laptop goes in the center of the desk, to the left of the post-e note and glass of water. Papers are already lined up to be read over the side of the laptop so she can jump back in. 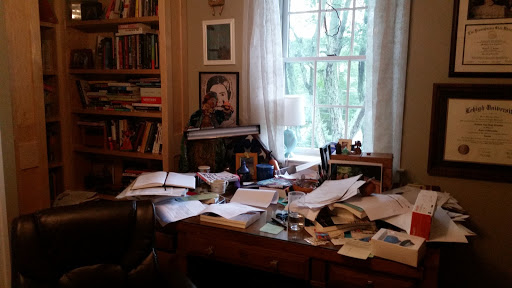 Follow Reflections on Gender and Postcolonial Issues on WordPress.com

← I’m a Capstone! so something good has come of me being on the twitter
Flipping the Script: Women and Violence →