What Makes a Literary Scholar? Sugar and Spice and Not Necessarily Moby Dick

At some point during the semester, Moby Dick comes up.  A student might make a connection to Ahab or to the symbolism of the white whale.  I pause, widen my eyes, and whisper through the room:  “Don’t tell anyone, but I have never read Moby Dick.  If they find out, they will take away my Ph.D.”  The students giggle, some open their eyes a little more widely.  I hope that some of them feel a little smarter than me for a moment, as I got to feel that way as an undergrad ONE time, which I still remember:  Dr. Borklund was saying that he had to go and ask a colleague about why a character in As I Lay Dying would do something.  Without pause, my hand shot up.  I offered my suggestion.  He told me that was exactly what his colleague had said.  I still remember the puff in my chest, feeling like maybe I got this (before we said “I got this”).

Then I tell my students that I have read Moby Dick.   This version: 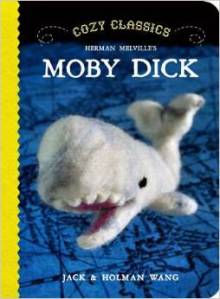 We love it.  One word per page.  I see this as an improvement upon Melville’s work.

Why do I take the time to air my dirty academic laundry with my students?  So they will see that there are many paths to the Ph.D.  That there is no one prescribed route one must take in academia.  That the canon–in all of its glorification of the white, dead male author–doesn’t have to have the stranglehold that it does on all of us.

I did most of my canonical reading in a fifteen-year span:  age ten to age 25.  During those years, I was keyed in to the idea of reading what was “right” or “correct,” and my 39-year-old self is so grateful to that younger version of me for building an amazing foundation for my literary study.  By the time I was 25 and starting my Master’s degree, I had realized that I preferred works that were never going to be considered part of Harold Bloom’s canon, but I was growing as a scholar and found that there was space for my voice anyway.

Those years did leave a few gaps that never got filled in, and now that I have my Ph.D. and a pile of books a mile high that serve me and my field, I don’t plan on filling those gaps in.  And yet I can still function as a literary scholar (One caveat:  I do have a working knowledge of these books, so if I were on Jeopardy, I could still answer questions about them!).  Dear reader, if you are still with me here in this confessional, I do not need to be convinced that these books are good.  I know.  And I certainly don’t need to be convinced that these books are “important.”  Believe me, the quasi-guilt that I carry around for not reading these texts shows that I know how important they are.  And at some point I picked each one of these books up, but it left me cold and I didn’t continue.  I am grateful that these books spoke to others, some of them my dearest colleagues, so that I didn’t need these texts to find my path to my contented life as a scholar.

I have never read a Dickens novel.  I taught “A Christmas Carol.”  Once.  But this means that I have never read A Tale of Two Cities, David Copperfield, Great Expectations, or any other way-too-long novel by him.

I already mentioned Melville’s tome.  I have never read any of the shorter works either.

I abort the mission around page 50 any time I attempt to read Tolkien (though I did read The Hobbit in middle school–because it was assigned).

I FORCED myself to get through The Great Gatsby in my late 20s.  I didn’t like it, but that one I made myself do.  However, I loved his other works when I was a teenager.  I still remember the devastation of coming to the the of The Last Tycoon only to learn that he had died and never finished the novel.

No Tess of the D’Urbervilles (I had to look it up just now to make sure I was even spelling it right).

But, wait, it isn’t just white men within the canon.  Now, this list hurts a little more because a feminist scholar is expected to know and adore the following books:

No Wuthering Heights (though we do have a Baby Lit version that is quite delightful).

No Frankenstein (I have tried.  And tried.)

Inhale because the next two are doozies…

I have never read a novel by Jane Austen.

I have never read a novel by Virginia Woolf.

I am terrified to even write those words, as if I am somehow less of a scholar for not forcing myself to read books I never, ever liked.

I have tried to read Mrs. Dalloway every summer.  I gave up last year.

I have been to Austen’s home, bought copies of her novels there even.  Couldn’t take them.

And there’s one more…

Little Women.  I just heard you gasp, dear reader.  I missed the window on Little Women, and now I figure I will wait and read it with Ev.

I have other gaps in my reading–all scholars do–but the above gaps feel the most egregious, the gaping lacuna of my reading life.

Why do I air my academic dirty laundry?  Is it because like many other women in academia, I often feel like a fraud, that at any moment someone is going to point a finger at me and say “Aha!  I knew you didn’t belong here”?  That may be part of it.  But I think there is more at stake than my personal reputation:  I want us to consider the need to rail against the hegemonic forces that claim there is a “right” way, an “only” way to be a scholar.  I am blessed to be in a department that will celebrate me for these choices, but I know in some circles, there would be some eyebrows raised and hushed tsk-tsking at my admissions.  Perhaps a kindly suggestion that I fill in these gaps before someone finds out, that someone who wants to be a “real” scholar of literature should realllly (cue snotty tone) have read all of those books, even if one never liked them.

To which I say “bollocks.”  Because those “gaps” above created space for other writers, writers whose writing makes me swoon at the end of the novel, whose sentences make me gasp, whose words leave me in awe.  I have written about many of those writers before, but lest you need a reminder, I offer you authors that keep me trucking and that make me never regret my reading choices.

And hundreds of others.  Hundreds.  So those gaps are no longer are my problem, will no longer be my burden to carry.  Because I think I turned out ok.  Just let ME be the one to tell my students that I haven’t read Moby Dick, ok?

← My Year of Reading Arab Lit: Samar Yazbek’s A Woman in the Crossfire
I expect better from Jon Stewart: AFRICA IS A CONTINENT →

We stand together in solidarity with our partners and children for the protection of our rights, our safety, our health, and our families - recognizing that our vibrant and diverse communities are the strength of our country.