My Year of Reading Arab Lit: Samar Yazbek’s A Woman in the Crossfire 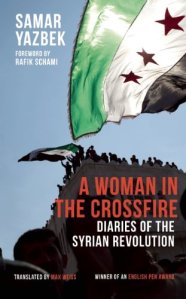 I feel lucky to have been introduced to Samar Yazbek’s work, and am frankly embarrassed I knew nothing of her work until I started this project of reading Arab women’s work in translation in 2014.  I am eager to read more of her work when the opportunity arises (and the lateness of this post–which should have been done in March–shows that tenure and teaching get in the way of the reading I want to be doing).  Her work stirs personal and political passions; she is an ardent human rights activist in Syria, a country that needs everyone’s ear at this moment in time.  I will not even pretend to understand every nuance of the current crisis in Syria (and if you need to be brought up to speed, visit the BBC’s overview here), but I can say that Yazbek’s work has helped me put a more human face on a story that merits more than the blip it is getting in the current news cycle.

Yazbek took great risk publishing A Woman in the Crossfire:  Diaries of the Syrian Revolution.  PEN honored her by naming her the PEN Pinter International Writer of Courage in 2012.  She has been called a traitor in her own country for having a voice and continuing to demand to be heard.  Her work is important and deserves to be more well known outside of Syria. 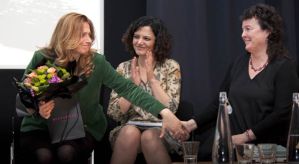 Translated by Max Weiss (who also won a PEN award, this one for the translation) and with a foreword by author Rafik Schami, the diary entries begin March 25, 2011 and quickly grow in urgency.  As she tries to get into war torn cities to gather information, she shows her tenacity and her commitment to documenting the events of Syria’s civil war.  The imagery stays with the reader, even one who has only a cursory knowledge of the issues in Syria.  In April of 2011, she writes, “I try to find one woman, someone to speak with more easily, but there are no women in the street.  When I hear women screaming and the distant sounds of gunfire I head back to the car.  By the end of the day, I am going home with documents.  Documents of flesh and blood, of wailing and bullets and the faces of murderers who don’t where they’re going” (21).  I appreciate that Yazbek reminds us that the experience of war is gendered, that women and men experience war differently–in this case her discussion of mobility reminds us that women are often behind closed doors during revolution.  I am grateful that she took the time in the midst of maintaining a life–and the life of her daughter–to document with detail and patience and dedication so that readers may be offered an opportunity to understand the suffering in Syria.  Only a few months pass in the book–the entries end July 9, 2011–but the reader gains access to the mind of a brilliant writer, artist, and citizen.  The book ends with a choice made for her daugther:  “This is the first time I put my daugther first.  All I want is to find an agreeable way to make the hardships all around me end” (255).  I encourage readers to bear witness to the months in between this choice and the earlier entries, to see why Yazbek is so deserving of the accolades bestowed upon her.

← Starting My Year of Reading Arab Women: touch by Adania Shibli
What Makes a Literary Scholar? Sugar and Spice and Not Necessarily Moby Dick →